This is part of a larger project I have begun working on over the holidays, involving a man's struggle to feed his two dogs.
Posted by Jenny Lewis at 09:43 No comments: 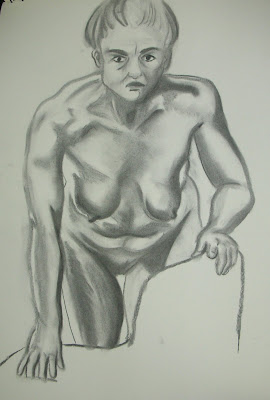 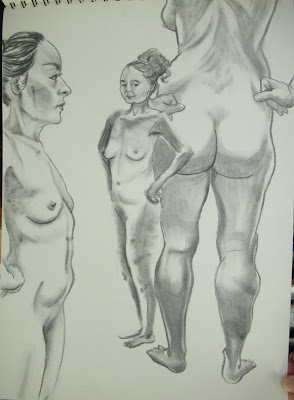 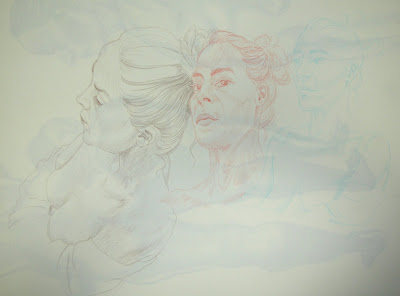 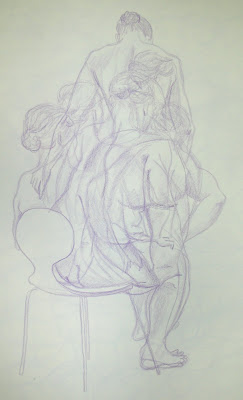 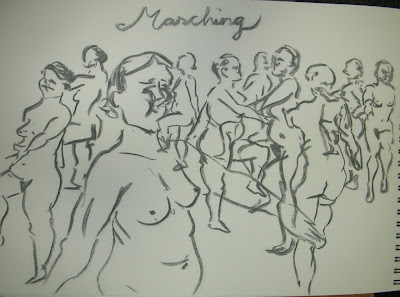 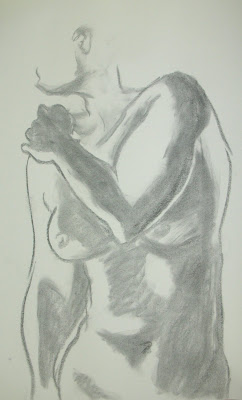 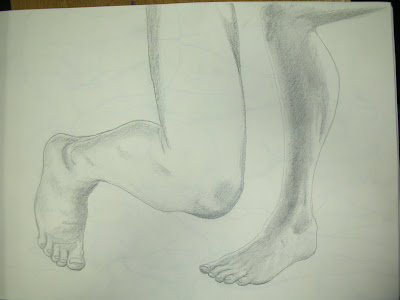 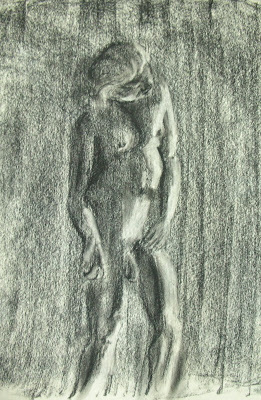 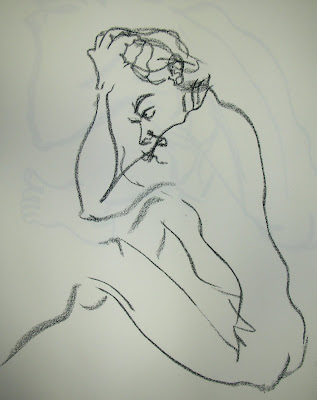 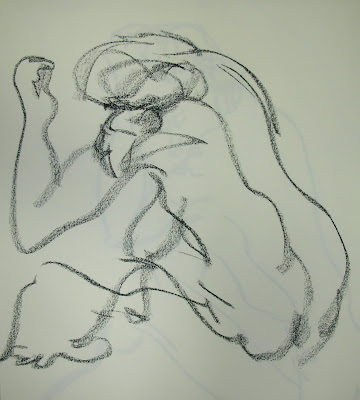 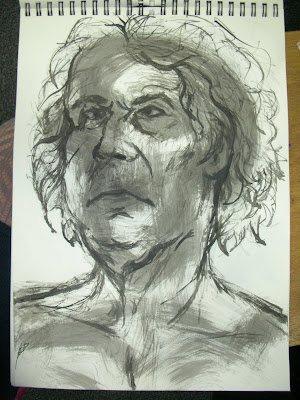 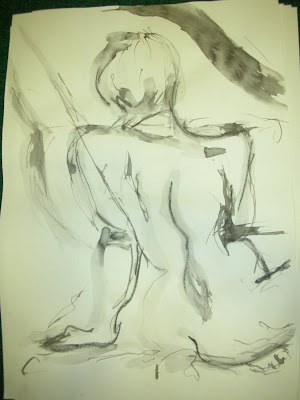 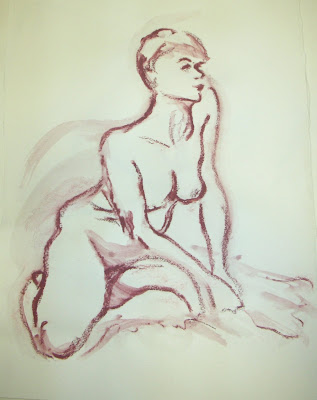 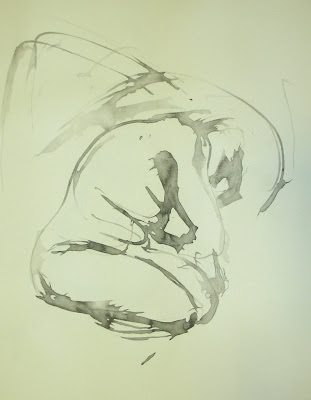 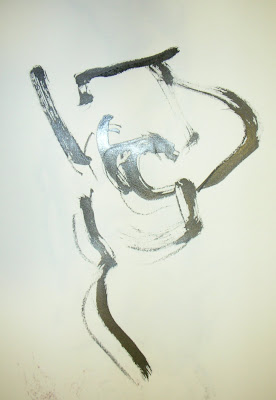 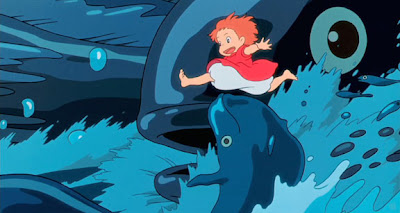 Today, a coursemate and I saw Hayao Miyazaki's 'Ponyo on the Cliff' at the Barbican. Anyone who is bored of the predictable discourse of Western narrative has to see this animation.
What I like best about Miyazaki's films is the refreshingly original worlds he creates. The featured creatures and their systems of existence are what makes Studio Ghibli stand out.
However, it's also what makes the films so unsettling and hence difficult to embrace. I'm sure that the young children filling the cinema were quite as disturbed as I was when I first watched Disney's 'Alice in Wonderland'!
The bizarre, combined with the simplicity of the script and plot, causes a dilemma as to what kind of target audience are best suited to Studio Ghibli's productions. This may account for how little financial success their films have had in the western world. However, Disney are determined to promote this new film in the US and so much the better if they succeed. Animations such as this have the power to expand young and old minds alike.
My favourite scene in the film was when Ponyo has released the elixir and is sprinting along the crashing waves. You can really sense the power behind the sea and I was completely transfixed!
Posted by Jenny Lewis at 15:08 2 comments:

Week 3 focused on follow through and we did a lot of flag waving exercises. Everyone was also to work on a jump-and-dive exercise, which offered a lot of comedy potential as you can imagine!
Trying to brush up on my Flash skills, I created this very messy animation. The symbols used are transparent so the lines defining the various sections of the body cross over and look messy. I though I would try it out to see if it created an archaic, cut-out aesthetic but it didn't exactly have the desired effect. At least it got a lot of laughs during the crit!!
Unfortunately, the movement is very jumpy on this uploaded version but you get the general idea :)
Posted by Jenny Lewis at 07:13 1 comment:


Week two was a struggle to get through at times because we were instructed to animate plain balls with no creative context at all! At one point, Jason was acting like he was having some sort of breakdown. I couldn't handle the lack of artistic license and ended up doing some silly stuff. Enjoy!
Posted by Jenny Lewis at 06:28 No comments:

In the first week of the Character Animation course, Steve set us to work on walk cycles to see what we could come up with.
Posted by Jenny Lewis at 05:53 No comments: 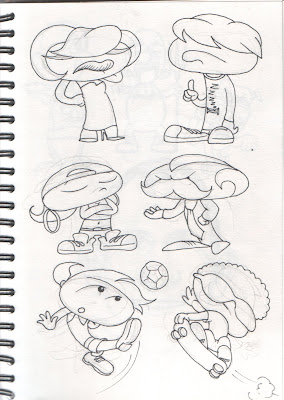 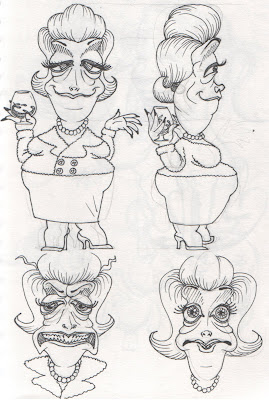 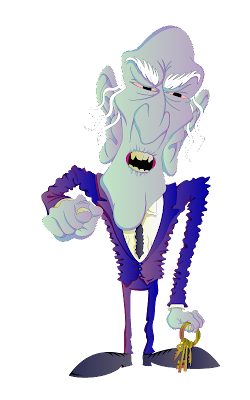 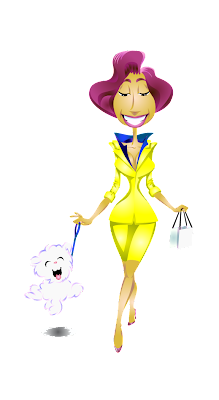 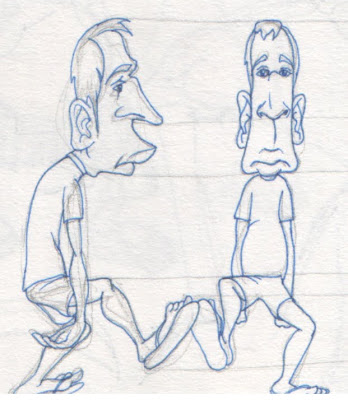 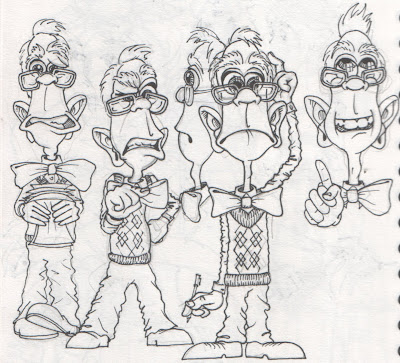 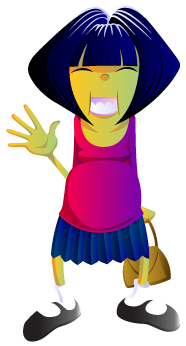 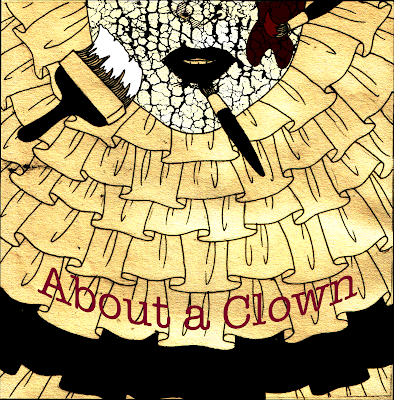 This is a CD cover design for my friends' band, Rubber Band!
Posted by Jenny Lewis at 16:03 No comments:

Animation to illustrate a sonnet. I created this mostly by hand and put it together with Photoshop and Final Cut Pro.
The piece is a salute to the personality or character of handwriting as opposed to typing, and to the loving relationship between hand and paper. This corresponds to the theme of tactility vs. digitality that runs through most of my projects.
The imagery begins with ancient tribal storytelling, evolves to a fairytale scene, followed by various symbols of playfulness, fantasy and freedom. The style, imagery, mood and technique all change at the turning point when the canary is captured. What follows are scenes of hopelessness, monotony and destruction.
Please pipe up if you have any ideas to improve the soundtrack of this animation because it bothers me!!
To see the poet's website, please visit owlnight.com
Posted by Jenny Lewis at 15:56 No comments:

"The new environmentalist consciousness makes us see landscape paintings as records of finite, fragile scenes...We are now more in touch with our dependence on nature and its dependence on us" (Malcolm Andrews, Landscape and Western Art).
This animation is a reflection on the significance of landscape traditions today. The relevance of landscape painting has changed as a result of extensive development: landscapes no longer signify a constant and stagnant haven but are burdened with guilt and nostalgia. Traditional landscape paintings depict a timeless scene, something you would expect to see upon returning to the represented location. As this is no longer perceived, I have created an ever-evolving landscape painting.
The landscape is integral to notions of national and personal identity, particularly in British traditions and ideas about heritage. David Lowenthal: "Nowhere else is landscape so freighted with legacy... nowhere else does the very term suggest not simply scenery and genres de vies, but quintessential national virtues."
Of all the reading I've done on landscape perception, I would recommend Simon Schama's 'Landscape and Memory' the most. It's amazing!
The tree in this animation is a mysterious and ambiguous symbol; it remains bizarrely untouchable to outside forces and acts as a time portal for the sleeping shepherd who leans against it. It symbolises the insignificance of human civilisation beyond our timescale.
Projecting the content or 'argument' onto a painted canvas creates a foil between materiality and digitality, emphasising the ephemerality of the digital image. I am very interested in exploring the manner in which artists and viewers alike relate physically to the digital image.
The entire animation is hand drawn and was compiled in Final Cut Pro.
Posted by Jenny Lewis at 15:39 No comments:

On Wednesday the 28th of October, I dragged a few coursemates along to the Barbican for a discussion and screening by the legendary Joanna Quinn. I had previously seen Dreams and Desires at the Leeds International Film Festival in 2006, when it was first released, and was awestruck. I love how organic and yet unique her style is, and how it emphasises the frame-by-frame nature of hand drawn animation. The mark-making of her individual drawings are packed with expression, adding to the incredibly bouncy, yet truly believable, movement of her characters.
The films screened were 'Girls Night Out' (1986), 'Body Beautiful' (1990), 'Elles' (1992), 'Britannia' (1993), 'Wife of Bath' (1998), and 'Dreams and Desires - Family Ties' (2006). I was deeply affected by the poignant Britannia. Another of my favourites is Wife of Bath - apart from the stunningly soft aesthetic, I always enjoy a token of feminism! The talk was great fun and everyone's excited to hear that we haven't seen the last of Beryl, the ongoing protagonist of Quinn's independent films.
Quinn's newer work seems to be be more popular amongst my coursemates than her older films but no one can quite put their finger on the reason for this. Her newer work is certainly more polished and less messy in terms of form and movement but has a messier line quality. This newer style has a softer aesthetic and there is greater attention to detail, whereas Girls Night Out has quite a conventional style for animation. I think it also has something to do with how the narrative and timing are packaged together. Perhaps you can shed some light on our querie!
My coursemate, Kajal, had never seen Quinn's work before and is now a big fan. We both bolted to find a cashpoint after the event as we were afraid she might disappear before we could bag a couple of her beautiful flipbooks.
All evening, she was cracking jokes at herself. If I were as talented and successful as Joanna Quinn, I couldn't hope to be so honest and humble about my work!