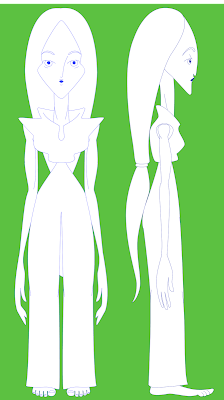 This is my first design for the protagonist of my animation. It is not the intended final visual style, but to be used as a motion template for tracing over at a later stage. I will animate this model in Flash and possibly trace where the highlights or shadows may be on the form in Illustrator or Photoshop.

I have called her Eve for now for the sake of convenience (so that I don't have to repeatedly write 'our protagonist' etc.) although I may change her name later depending on what I want her to represent, e.g. Lileth!! So far, she represents nobody in particular: any and every woman and man.

This is an unusual character design to me and required a careful balance between the principles and the aesthetics. I wanted a figure that conveyed a strong sense of ethnicity: her colouring is very washed out and her mouth, nose and hair are caucasian; her incredibly long arms and legs are like those of a male African athlete; her cheekbones and chin have tribal, mask-like qualities. If this is controversial, at least it will trigger some discourse!

I also wanted to convey strength without denying her femininity. For power, I gave her a strong neck, broad shoulders, long arms and large hands and feet. As these features are typically masculine, I balanced them out with broad hips, long legs, long hair and a tiny waist. Hopefully the unusual proportions won't make the animation look unconvincing.
Posted by Jenny Lewis at 10:28